What About Moissanite for Your Engagement Ring?

Do Moissanites and Engagement Rings Mix?

Do I like it and do I sell it? Read on and find out. What is this post about?

I’ve had more than my fair share of questions about Moissanite as an alternate to Diamond.

I’ll give you the history, what it is, a laboratory grown material, the pro’s and con’s of Moissanite, and the advice on how best to select and buy it should you choose to go down the Moissanite path. Who the Hell Discovered Moissanite?

Moissanite was discovered by French chemist, Henri Moissan, in a crater in Arizona in 1893.

At first, he thought he’d found diamonds. It wasn’t until later that he identified the mineral as silicon carbide.

That was a seriously unsexy name. Which no doubt, was why it was changed to Moissanite in honor of its discoverer. Does an Amateur Rock Hound Stand a Chance in Hell of Finding His Own Supply?

Naturally occurring moissanite is rare on Earth. So much so, that unless you have your own space ship and access to an asteroid belt, your only commercial alternative are lab grown stones. Which isn’t necessarily a bad thing.

What are Moissanite’s Properties?

Depending on which scientific publication you read, Moissanite has a hardness of anywhere from 9.2 to 9.25 on the Mohs scale, putting it closer to ruby and sapphire at 9, than diamond—at the top of scale—at 10.0.

This means that it is a pretty hard stone and that, unlike softer, more scratch-able CZ, it isn’t going to scratch as much and look dull on your twenty-fifth wedding anniversary.

Moissanite also shows good fire and sparkle as well as typically having good clarity. The company that makes it has a policy of only selling VS Clarity and above. So you probably don’t need to look at one under a loupe to know it has good clarity.

As for color this is where you have to decide if you can settle for possibly less than ideal whiteness. This is on the website, www.moissanite.net:

“However, you need to know that Moissanite cannot compare in color to a colorless diamond. Moissanite has a slightly darker (approximately H-K color) but really cannot be differentiated from a diamond in the same setting. You might be able to see a difference in color if you compared loose Moissanite stones and loose diamond stones.”

In some stones, very slight shades of green or yellow are apparent.

How  Much Does Moissanite Cost?

Moissanite costs considerably less than diamonds. While a one carat diamond might cost $5,000, a similarly sized moissanite might only set you back $700 or less

Be aware, though, that while diamond size is measured by weight (in carats), Moissanite is usually measured in millimeters. This is because their weights are different. For this reason you’d want to order a 6.5mm Moissanite to get one similar in size to 1ct diamond.

Is Moissanite Suit for Wedding Rings? 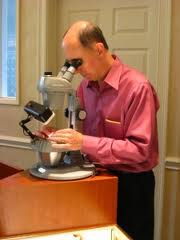 If you’re a purist and insist on a traditional, naturally occurring gemstone for your wedding ring, diamonds are the way to go. Moissanites are labgrown.

Natural diamonds take millions of years to form and could be said to be part of the history of the planet. Moissanites haven’t been around for quite so long. In fact, the particular one you’re looking at might have only been around since last Tuesday.

Diamonds are relatively expensive compared to Moissanites. If you want a larger stone but can’t afford the former, you might get the latter. Down the line, if you decide you want to switch the Moissanite for a diamond, by all means, do so. Swapping one gemstone for another is common and easy to do. There are three reasons why people might choose a diamond first:

1. Diamonds are the symbol of everlasting love and Moissanite isn’t. So you’d be letting everyone think it’s a diamond because it acts like one. That might get to kind of bug you if all your friends have a diamond and you just pretend you have a diamond. Like you maybe have a hollow symbol of love.

2. One day your kids will get your wedding rings and they might be bummed to find out that it’s not a valuable diamond. If they ever need money in an emergency, that Moissanite will not get it for them. It’s just not valuable like a diamond is.

3. If you are a guy and you decide to get your girlfriend an engagement ring with the size of stone she wants and the design she wants and you put in a Moissanite, because that’s all you can afford, well she’s going to find out. And that could get ugly.

Filed in:
Next Article